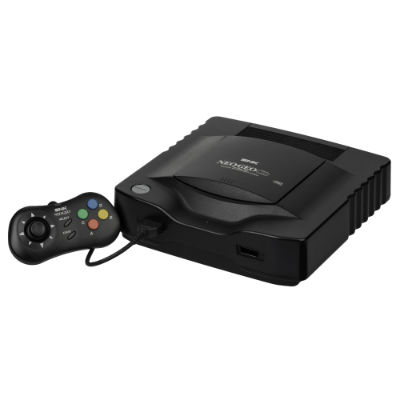 Probably the main factor to consider when buying a Neo Geo system is cost. When these games were initially released, they used to cost several hundreds of pounds to buy, as the games were released on cartridge and were modified versions of the original Neo Geo MVS Arcade game so what you were buying was as ‘Arcade Perfect’ as you could get without buying your own machine.

Ideally, you should look to get an AES machine as there are no loading times and the AES joysticks are one of the best around. The downside of the AES is the cost of the cartridges. The cheapest complete carts tend to go for around £30 but for some of the rarer games, you can spend hundreds easily! The Neo Geo was home to a LOT of fighting games like the Fatal Fury and King of Fighters series, so you’ll often find the older fighting games are quite cheap while the non-fighting games tend to fetch higher prices.

If you want to save some money but still get into the Neo Geo, then the CD machine could be the way to go. Generally, the machine itself is cheaper to buy and the games certainly will burn a much smaller hole in your pocket. However, the major downside to the CD machine is the loading times – it only had a single-speed drive so expect to see a lot of ‘Please Wait’ messages, especially with some of the more graphically-intensive fighting games. The CDZ has a double-speed drive which alleviates the problem somewhat, but it’s still frustrating. If you plan to buy lots of fighting games, you might want to get an AES machine unless you have the patience of a saint.

As for the best places to buy Neo Geo Hardware, the two main choices have to be either Ebay or Videogameimports.com. The latter always have Neo Geo Hardware available and a wide selection of games too.

Important – the online shop will be closed until further notice. Please click here for more information.